I received zero feedback 📝on my anniversary blog improvement post. Not what I was hoping for. So…time to move on…

July has not been kind to the garden. Most plants don’t like living in 100 degrees. Especially when the lady goes on vacation and they don’t get watered. Some of the crops bounced back and some gave up. It wasn’t their fault. But that is the plight of the gardener.

August hasn’t been much better. There has been a heatwave ☀️that just won’t stop and it’s been so humid. I don’t even want to go out to water. Crops are struggling despite daily watering.💦

Most of the cantaloupe plants died. Of the ones that didn’t die, the melons fell off of the vine prematurely or were very tiny. They still tasted fine but they were more of a personal size. I still have this one little guy giving me hope.

The honeydew finally took off. I was ready to pull it out. But there it is. There are a few melons that snuck up on me.

The raspberries have set their buds for their fall crop. I already enjoyed some berries. The yellow berries produce twice a year. 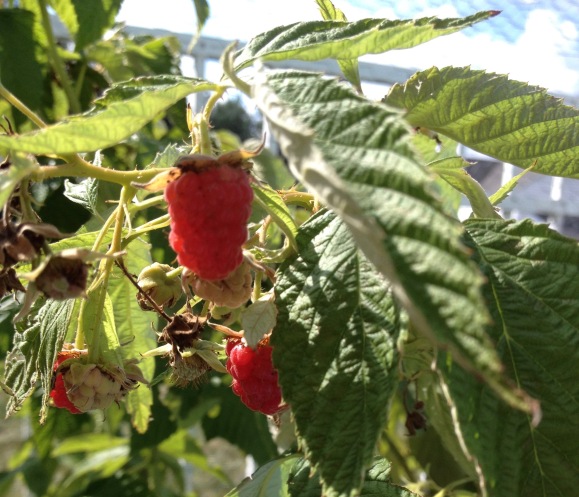 While the potatoes didn’t do as well as in the past I have still be able to harvest quite a few. I have just been digging out enough for dinner or until my shoulder protests loudly. Not ready for digging.

The butternut squash are ripening nicely. I will leave them on the vine as long as possible.

The Longs of Naples squash has stopped growing and I believe it is working on ripening.

Yikes, I have a second one now. These better taste good because we’ll be eating them a long time…

I have to pull out a few zucchini plants due to the squash vine borer. It’s not worth dealing with since I’ve already gotten so many squash. I still have two plants that are producing.

The tomatoes are still producing, although my cages aren’t high enough and now they are starting to fall over from the weight of the tomatoes. I will attempt to fix that by sticking some poles in the ground.

The Brussels sprouts have some little babies going. I’m not really sure how well they are doing because I’ve never grown them before. Two plants are growing much better than the rest.

I am starting my fall garden. Spinach, radish and snow pea seeds are on the counter soaking. This will help with a quicker germination.

My late summer/fall plantings will consist of

These are all plants that enjoy the cooler weather of spring and fall.

What do you plant in the autumn?

If you’ve never planted anything, why not start?